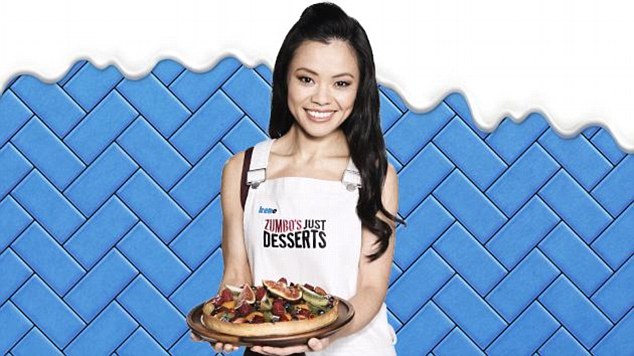 I never thought I would learn a life lesson from a dessert making show, but ‘Zumbo’s Just Desserts’ has proven me wrong. Set in a Willy Wonka style dessert making factory, the show’s 12 contestants compete for the title of ‘Best Dessert Maker’ and $100,000. It is sugarcoated madness and truly binge worthy. But behind the fabulous desserts and cheesy one liners, a study of one of the show’s most promising contestants perfectly exemplified the dangerous power of negative self talk, the crippling effects of self doubt, and the positive correlation between confidence and success.

Irene was a financial consultant with a dream of being a dessert maker full time. Though she consistently turned out beautifully made creations with an array of craftily combined flavors, arguably being one of the best dessert makers on the show, she was her own worst critic.

“Well that’s terrible.” She would say as she took out her perfectly set sponge cake from the oven.

“I can’t believe I’m messing this up so badly!” She cried, racing from one task to another.

The self depreciation got so bad that after a couple rounds of challenges, the judges would try to encourage her during their critiques.

“Irene, your dessert looks and tastes amazing,” Professional baker and show co-host, Rachel Khoo would say. “But you need to have a little confidence.”

Unfortunately, Irene’s self critical mindset ended up being reflected in her desserts, and (spoiler alert!) the judges eventually sent her home.

So many of us can be like Irene. We have the talent and the ambition to achieve our dreams, but lack the confidence that is necessary to fuel our own success. Watching Irene struggle to believe in herself reminded me of all the times I have wrestled with self criticism and perfectionist tendencies in everything from my job, to my body image, to my artistic pursuits. So if you’ve ever felt like Irene (or me!), here are four ways to bolster your confidence, silence your inner critic, and accept yourself for who you are while still striving for success.

Realize that you will never be perfect.

If Irene had seen the good in what she was creating instead of actively looking for the ways in which she had failed, she would have been able to recognize the unique beauty in her creations. By allowing herself to be consumed by self doubt, she was dooming herself to disappointment before she even began her dessert.

We all have an inner critic that seems to show up in our weakest moments, reminding us of the many ways we have ‘failed’ to reach some undefinable level of perfection. Some of us cling to this voice as the voice of truth because it feels more natural for us to focus on our flaws rather than to recognize and celebrate our achievements. But this critic does not help us grow or become better at what we do; it only causes frustration and encourages insecurity. Something that I have gotten into the habit of doing when I feel myself nitpicking at my own imperfections is to say these four phrases to myself.

When you combat the voice of negativity with the unconditional acceptance of the person that you are, you will begin to recognize the value, importance and beauty of your efforts rather than always focusing on the ways that they ‘fall short’.

Treat yourself with kindness.

Irene would probably never speak to a friend or loved one in the same way that she spoke to herself on the show. She berated, mocked, and discouraged herself until she was in tears. She had an internal battle going on between the dreamer who knew she had the talent to succeed and the doubter who told her how worthless her efforts were because she would ‘never measure up’. If she had focused on encouraging the dreamer, she would have felt infinitely more empowered to excel in her skills.

We create the environment for our own success or failure in our minds where we can either water the seeds of empowerment, or feed the weeds of self doubt. We get to choose which words we hold onto to define ourselves with. By enforcing the use of kind words in our self talk, we are cultivating a confidence that will eventually bloom into genuine and sustainable self belief.

Allow your mistakes to make you better.

Like every other contestant on the show, Irene made mistakes in some of her recipes. But her downfall was that she would allow those mistakes to throw her completely off track, tainting the rest of the round with uncontrollable anxiety and a prematurely defeated attitude. Her initial mistakes were never too bad, but they would cause a spiral of negative self fulfilling prophesies that would eventually lead to the destruction of her desserts. Had she given herself the grace to make mistakes and had learned from them in order to become a better baker, she could have won the whole competition.

It’s so difficult for many of us to accept that we are going to make mistakes. I constantly mess up and I have to work hard at reminding myself that that’s ok; I’m only human! It’s what we do in the aftermath of those mistakes that is a real reflection of who we are. Are we going to let our failures define us, or use them to learn and motivate ourselves to do even better next time? While one mindset will lead to frustration and disappointment, the other will lead to later success and personal growth.

Give others permission to believe in you by believing in yourself.

Irene never expected anyone to believe in her because she didn’t believe in herself. If she had recognized her own talent, celebrated the small victories throughout the competition, and didn’t allow setbacks to open the floodgates of negative self talk, she could have really excelled as a dessert maker. Others would have been able to coach her and guide her without feeling like they would crush her already fragile ego with any constructive criticism.

We have to be our own biggest advocates in order to set the example for others of what believing in us looks like. In all honesty, if you don’t have confidence in yourself, what reason could you give someone else to have confidence in you? No matter how much talent someone might have, the only people who actually achieve big dreams are the ones who believe they can. Furthermore, because it is very rare for someone to reach that kind of success completely on their own, they will need to be able to garner the belief of others who can help them get to where they want to go.

Maybe Irene was just having a really bad few weeks when she was on ‘Zumbo’s Just Desserts’. But nonetheless, her time on the show spotlighted the importance of confidence and positive self talk to all those who watched the effect that her painful descent into self doubt had on her performance. We all have insecurities, but we all have reasons to be confident as well. If we learn how to believe in ourselves, we will generally be happier in our lives, more successful in our pursuits, and much more encouraging to watch on dessert making shows.

Bonus Content: Check out my original song about learning how to love and believe in yourself called ‘Better Friend’.